Reporting implies that some changes are to be made to the original statement. These changes include modifications to pronouns, time adverbials and verb tenses. All of them are referred to as backshift.

Depending on the idea of the statement, we have or don't have to use backshit.

If we don’t believe that the direct speech statement is true any longer, we must use backshift.

I’ve just spoken with him. He said he is going to be late as he is still at work. (Still true)

He said he was going to make a proposal but they broke up the previous month. (No longer true).

We don’t need to change the tense in indirect speech if what a person said is still true or relevant or has not happened yet. This often occurs when someone talks about the future, or when someone uses the present simple, present continuous or present perfect in the original statement:

They promised they’ll help you. (Their promise applies to the future.)

We use backshift when it is logical. For instance, if Mark said "I am hungry" two minutes ago and we are now telling his mum about it, we might not use backshift (because Mark is still hungry): Mark just said that he is hungry.

But if Mark said "I am hungry" yesterday and we are now telling his mum about it, it is better to use backshift: Yesterday, Mark said that he was hungry.

We usually don’t change the verb tense when:

They explained that these changes are essential according to the new law.

She told him that caring for other people makes every person better.

2) the verb comes after a time conjunction (when, after, etc.)

She said that she had started her career after she had left school.

They told us they got married when they had graduated from the university.

However, we must remember that in all these examples above, the changes are optional, so it is possible and correct to change the verb tense.

● Here are some examples of common verb tenses and modals: 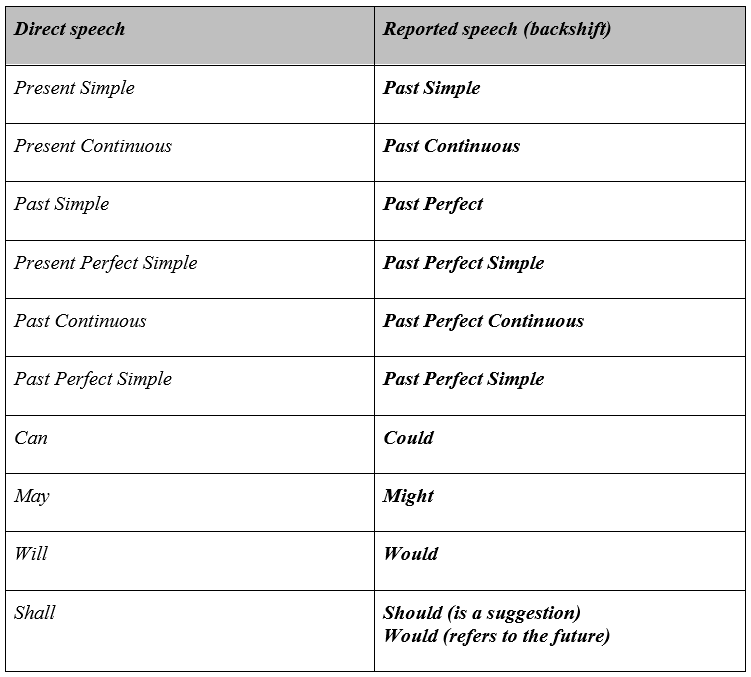 However, we don’t use backshift with modal verbs such as could, might, would, needn’t, ought to, should, must and had to.

● Here are some examples of demonstratives, adverbs, and adverbial expressions: 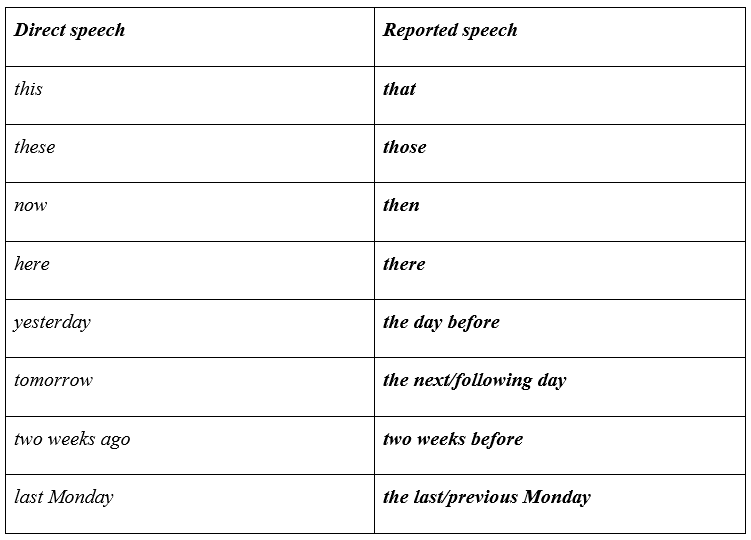 I will visit you tomorrow. - She said she would visit me the following day.

I lost my phone yesterday. - He said he had lost his phone the day before.

However, we don’t change the time and place references if the statement is reported on the same day or at the same place.

● We can report somebody's words using reporting nouns as well as reporting verbs. These are more common in writing than speaking, and are usually quite formal. The reported clause after a reporting noun is usually a that-clause.

His remark that we hadn’t worked hard enough upset everyone.

Mark’s claim that he was ignored by everyone is hard to believe.