In English, we use the passive voice when we don’t know, or we don’t want to talk about who or what performs the action that we are describing in our sentence.

We have been told that you were gossiping about our relationship. (We don’t want to say who told us the gossip.)

Her purse was stolen in the shopping mall yesterday. (We don’t know who stole the purse.)

Other reasons for using the passive voice are:

1) the agent (the person or thing that performs the action) is unknown or obvious:

The robber was arrested last night. (It is obvious that it was the police who arrested him).

2) the agent is “people or things in general”:

Polyvinyl chloride cannot be used in metal processing. (We are talking about general use).

3) the agent is a long phrase:

4) avoiding references to ourselves and making a statement impersonal:

This work can’t possibly be completed overnight. (The problem is the work rather than the people who are doing it).

5) in factual writing when the focus is usually on events, achievements, etc. rather than agents:

Vaccination had been pioneered many years before the coronavirus pandemic. (We are focusing on the event (=vaccination), not who or what did an action).

6) avoiding “you” in orders and rules:

All essays must be handed in before the end of the month. (It is the order for all the students).

In a passive sentence, the object of an active sentence becomes the subject. Then we have to use the verb “to be” in the necessary tense and add the past participle of the main verb after it: 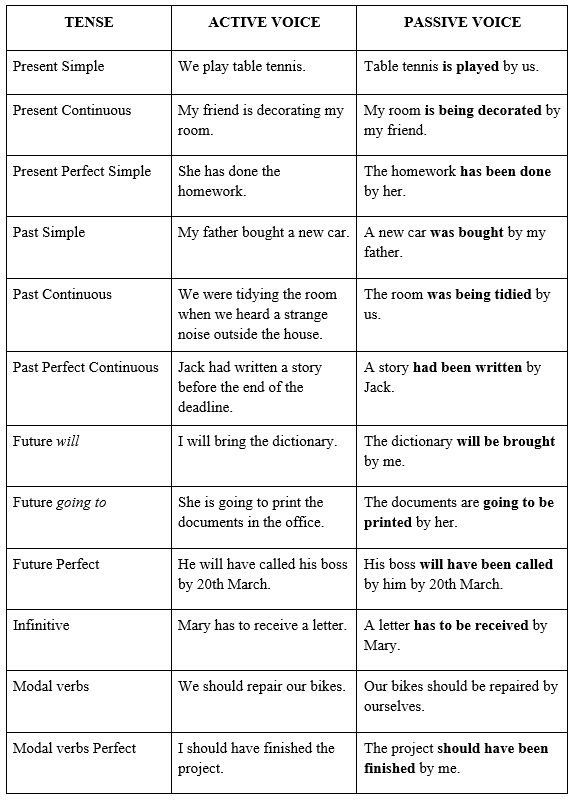 *We can not use intransitive verbs in the passive voice because they don’t have an object that can be changed into the subject.

Verbs that have two objects (usually a person and a thing) have two passive forms because either of the objects can became the new subject:

They gave an award to an unknown poet. (Active Voice)

The award was given to an unknown poet. (Passive Voice)

An unknown poet was given the award. (Passive Voice)

- after verbs that are normally followed by -ing forms:

Women love being given flowers.

- as participles, usually with the meaning of «because»:

Having been bitten by a dog, he was immediately hospitalized.

- as a subject of a sentence:

Being judged unjustly is never an easy life.

We form the passive infinitives of verbs by putting to be in front of the past participle:

There is too much to be taken into the consideration.

The stories have to be written before Thursday.

We use Perfect passive infinitives to emphasize that something is or isn’t completed:

My new laptop was to have been delivered today but there was a problem with the courier.