We can often see that adjectives are used with certain prepositions. They are needed to complement or clarify the idea or emotion that the adjective expresses. The preposition is placed directly after the adjective and is followed by a noun or gerund.

Here is a list of the most common prepositions used with adjectives:

There are no clear rules when it comes to choosing which preposition should be used with this or that adjective. One trick that might come in handy is to find synonymous or antonyms adjectives, which in most cases pair with the same prepositions. Another method is to look at how the related nouns combine with prepositions.

“Tod was afraid of the explosion.” (original)

“Tod was scared of the explosion.”

“Tod was terrified of the explosion.”

“Paula is good at 3D-modeling.”

“Paula is bad at 3D-modeling.”

“Jason is obsessed with pottery.” (adjective)

“Jason has an obsession with pottery.” (associated noun)

As it is quite hard to “guess” the suitable preposition, the best way to avoid mistakes is to memorize some of the most common pairings. However, there are some guidelines that can help you choose.

When paired with an adjective, the preposition “of” can describe causes of mental and physical states (e.g. fear, exhaustion, anxiety, etc.) or give descriptions of actions and people. 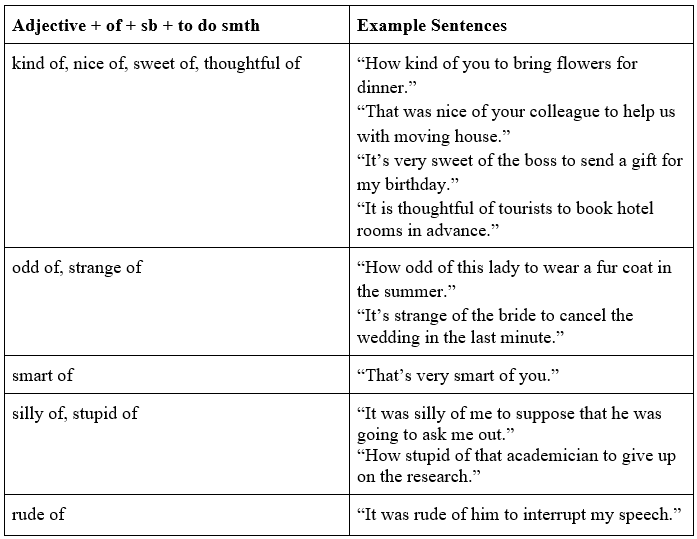 An adjective paired with the preposition “to” can identify behaviors, states, or connections between things and people. 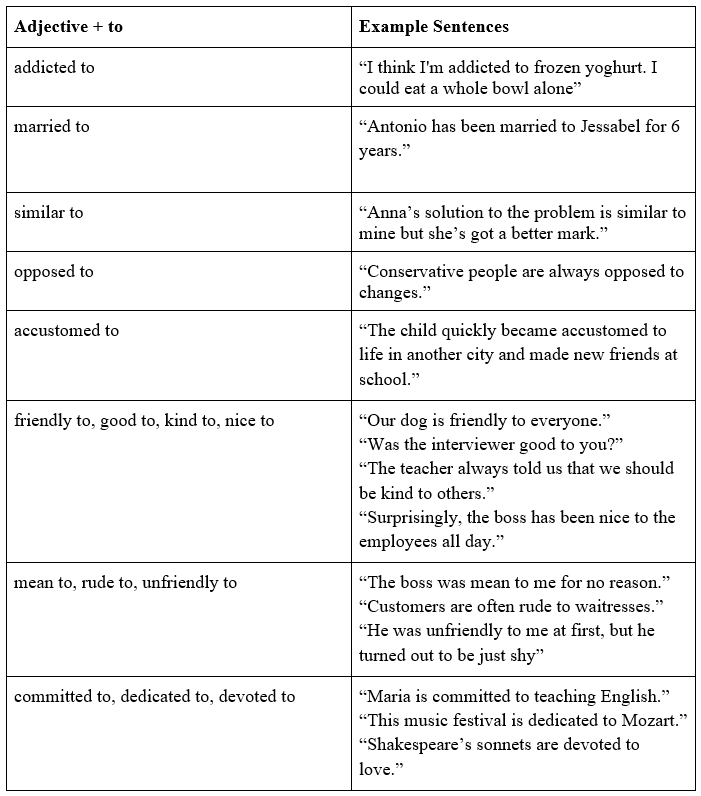 “About” can be used with adjectives to demonstrate emotions in regard to specific situations or events. 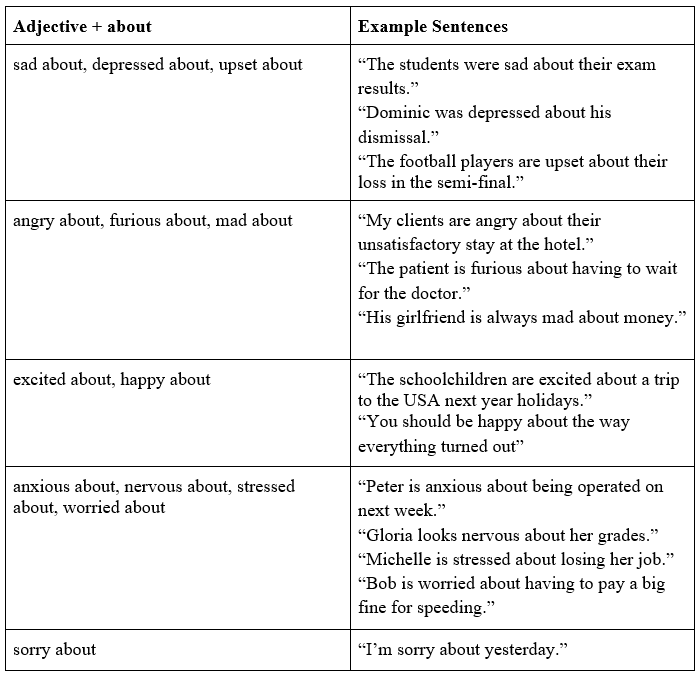 The preposition “for” typically accompanies adjectives to show purpose or reason.

We may also use “for” to accentuate one’s feelings towards a specific event, thing, or person.

“Brigitte feels bad for the poor so she donates money and clothes regularly.”

“Kim is happy for her sister’s success in business.”

“The citizens felt hopeful for the future of the country.”

When used with an adjective, the preposition “with” can indicate the cause of an emotional state or a connection between things or people. 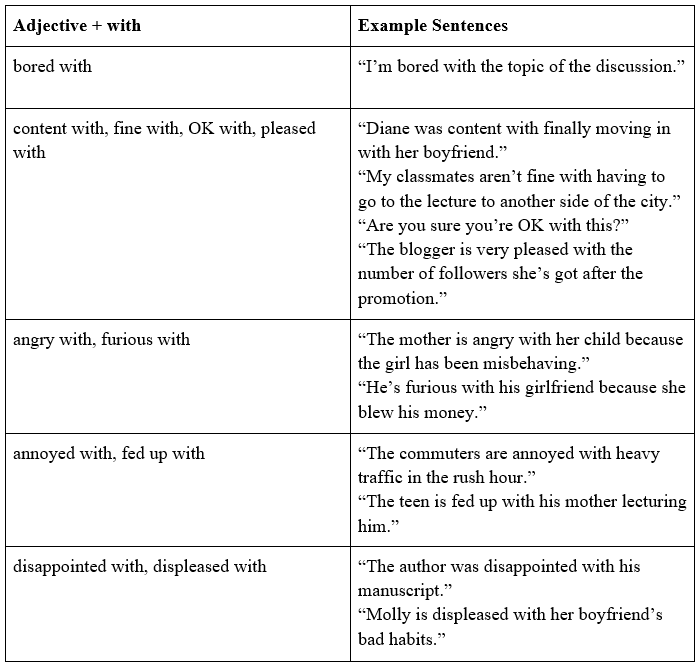 It is also possible to use “with” in passive sentences to depict the states of people or things:

“Sochi is not normally crowded with tourists in the wintertime.”

“The muffins are filled with strawberry jam.”

“The pillow is stuffed with feathers.”

Most adjectives which combine with “at” can also take the preposition “by”. Following adjectives, these prepositions portray causes for specific reactions or emotional responses. “By” can be used instead of “at” only because these sentences require passive voice. For example:

“The rich girl was astonished at/by cheap prices in this shop.”

“The family was amazed at/by the number of friendly people ready to help them.”

“The teacher is shocked at/by her students’ behaviour.”

“Passengers were surprised at/by the plane shaking during the flight.”

“At” can also illustrate skills and abilities when it follows positive and negative adjectives, such as good/bad and wonderful/terrible. In such phrases, “by” cannot be used in place of “at”, as the sentences are not passive. For example:

“Barbara is good at acting.” (correct)

“Barbara is good by acting.” (incorrect)

“Pam and Tommy are terrible at music.” (correct)

“Pam and Tommy are terrible by music.” (incorrect)

Adjectives taking the preposition “in” can emphasize connections or relationships between people and things. For example:

“Daniel is interested in starting his own rock band.”

“Are they involved in some illegal business?”

Some adjectives can be paired with the preposition “from” to show the point of opposition or the result of an action. For example:

“Lilac is different from purple.” (point of opposition)

“The civilians were protected from the terrorist attack and evacuated.” (point of opposition)

“The mother is tired from sleepless nights with her newborn baby.” (result of an action)

To clarify or give emphasis to ideas expressed in sentences, nouns can be accompanied by particular prepositions. The preposition comes directly after the noun. Take a look at the list of the most widely spread prepositions following nouns:

There are no specific rules to tell you which preposition to use after which noun. However, you can use one hack to help you choose – observe how synonymous nouns and associated verbs combine with prepositions, and in most cases your guess will be correct.

“Women’s response to the commercial left much to be desired.”

“Women’s reaction to the commercial left much to be desired.”

The same prepositions typically accompany nouns and the verb forms associated with these nouns.

“Our professor shows a great dedication to his subject.”

“Our professor dedicates a lot of work to his subject.”

Study these common pairings so that you can get the hang of how to combine nouns and prepositions.

This preposition indicates an objective. 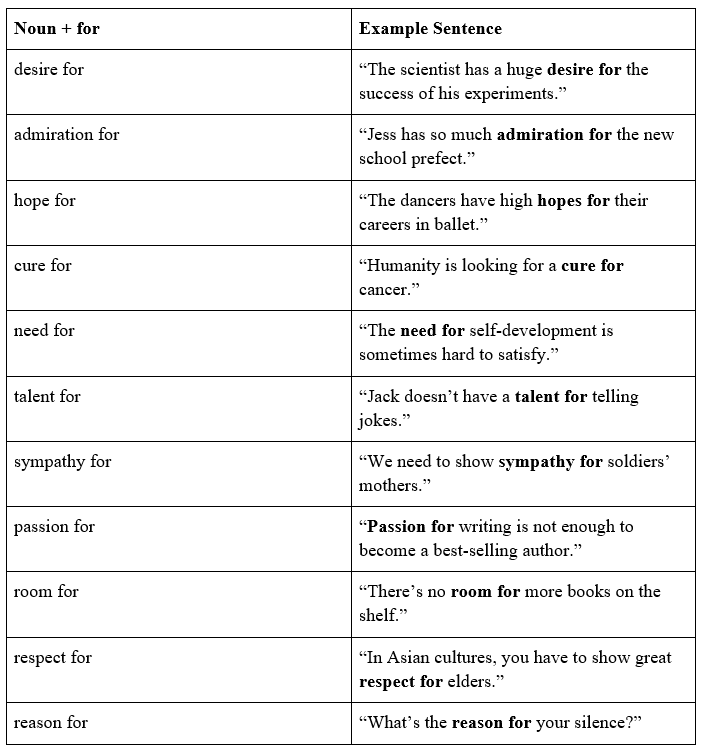 Use this preposition to indicate the recipient of an action. It can also indicate destination. 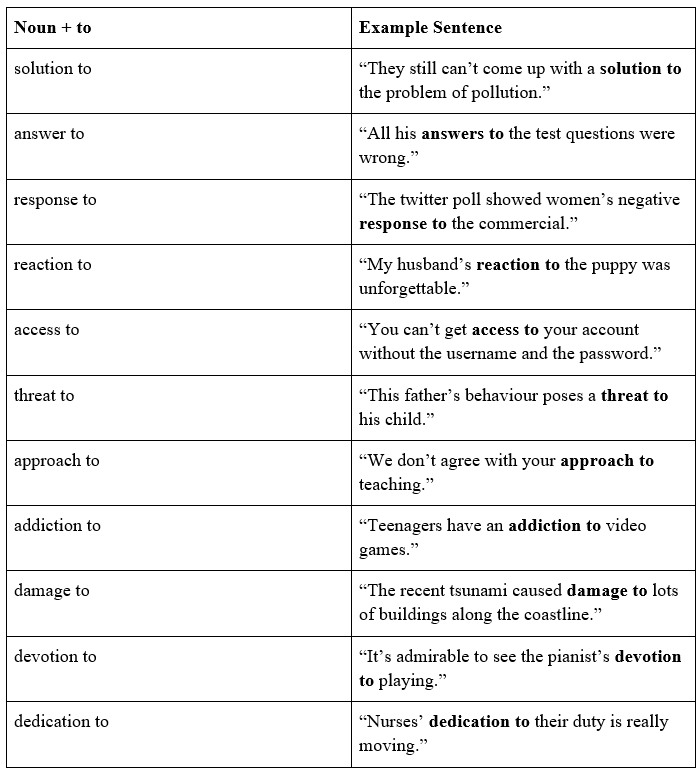 This preposition expresses a conditional state of being. 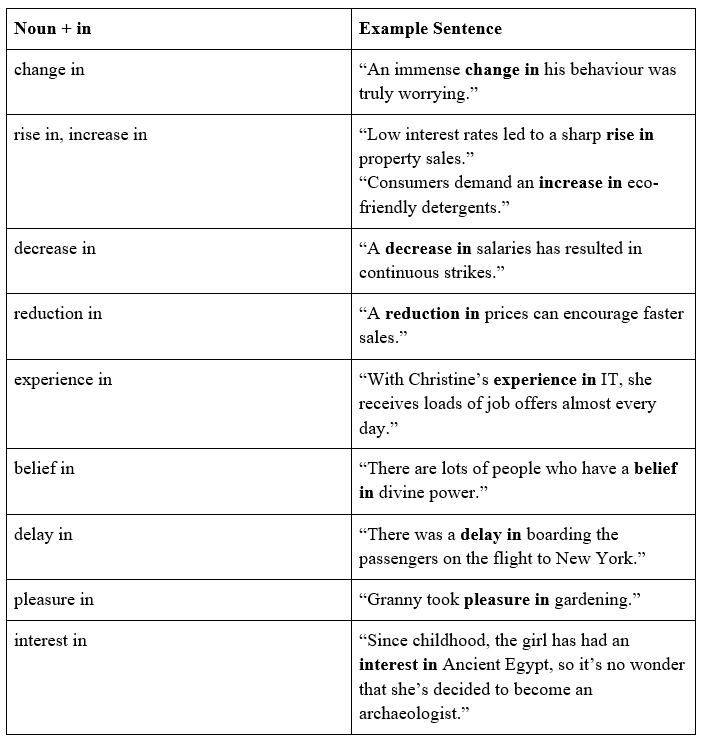 Use this preposition to indicate causality or a relationship between subjects. 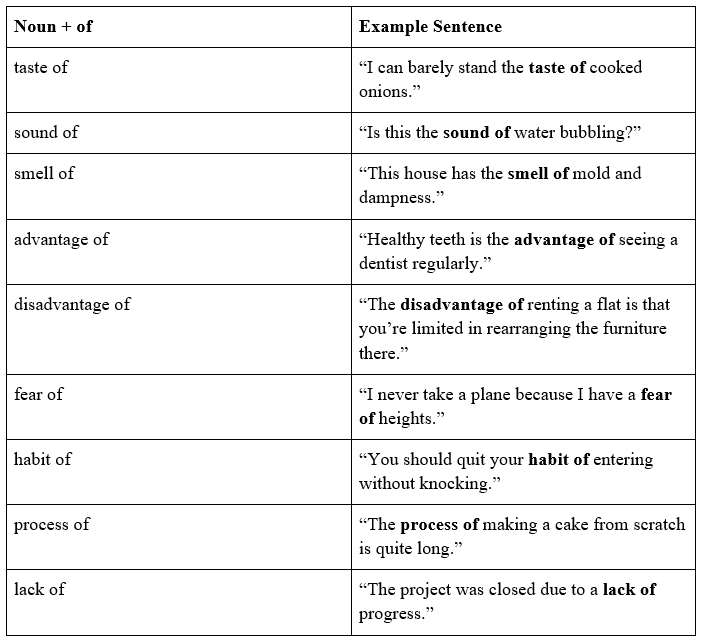 This preposition expresses a state of being or an intention. 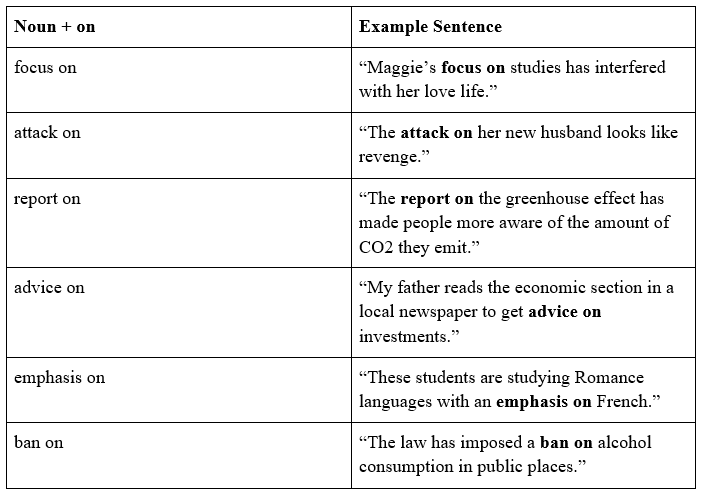 This preposition expresses relationships or connections.

“At” follows nouns to show a point in place or time.

When paired with a noun, “from” refers to two things opposing each other. It can be used in conjunction with to in order to specify an origin or starting point.

The preposition usually refers to synonymous expressions “concerning” or “in regard to”.