He doesn’t have a sense of humour.

The citizens were concerned about the rising levels of organised crime.

When the subject of the sentence is complex, the following verb must agree with the main noun in the subject group:

The rule doesn’t change when the verb precedes the subject due to inversion:

Written on the paper were the names of the candidates.

If the subject is expressed by a clause or a phrase with a non-finite form of the verb as the head word, we usually use a singular verb:

To love and to be loved is the greatest happiness of life.

Shouting at your child is the worst method of parenting.

Whoever did that remains a secret.

What worries me is her carelessness.

Some nouns with a singular form, referring to groups of some kind, can be used with either a singular or plural form of the verb. Such nouns are sometimes referred to as collective nouns:

The crew has / have decided to delay the launch of the ship.

In some contexts we have to use a singular or a plural form of the verb:

When names and titles ending in -s refer to a single unit, we use a singular verb. Examples include countries; newspapers; titles of books, films, etc.; and quoted plural words or phrases:

The Netherlands is a small country sandwiched between Belgium and Germany in Western Europe.

The Tudors is a historical fiction television series set primarily in 16th-century England.

The New York Times is an American daily newspaper with a worldwide readership. 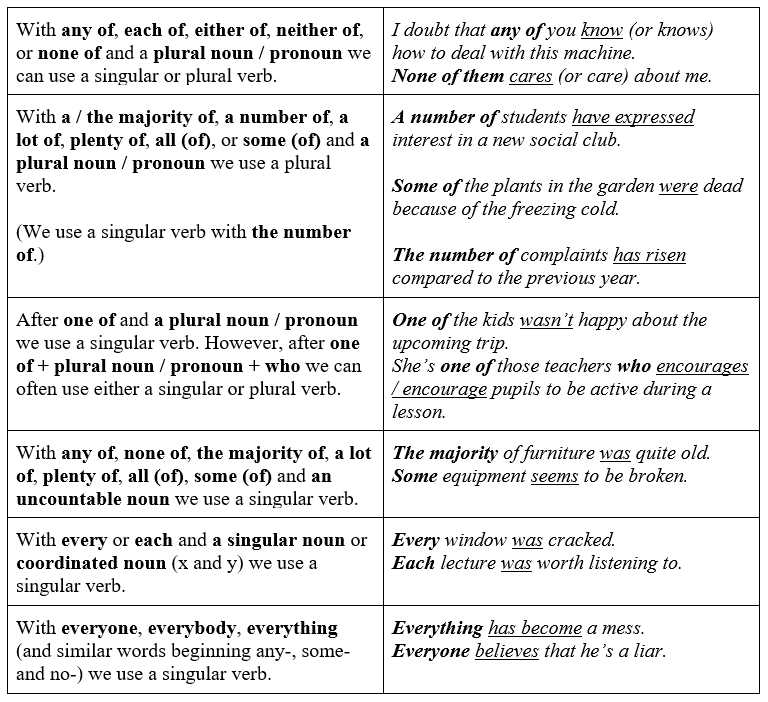 When a subject has two or more items joined by and, we usually use a plural verb:

My mother and I have been living together for quite a long time.

However, phrases connected by and can also be followed by singular verbs if we think of them as a single item:

Fish and chips is a traditional British dish.

Either the bus station or the entrance to the marketplace is (are) a good place to meet.

My sister and her friends are coming over tonight.

If the last item is singular and previous item plural, we can use a singular or plural verb:

Either the teachers or the principal is (are) responsible for the spread of bullying at school.

There have been many complaints about the quality of roads in the city centre.

Some nouns are only used in plural and thus are used with plural verbs:

Your belongings are in the hall.

The goods have been successfully transported to France.

Exceptions: “Whereabouts” can be used with either a singular or plural verb. “Police”, “people” and “staff” always take a plural verb:

Police suppose that he may be hiding in Argentina, although his exact whereabouts is / are still unknown.

Staff say that there have been some problems with the software lately.

Although the words “data” and “media” (= newspaper, television, etc.) are plural (singular: “datum” and “medium”), they are commonly used with a singular verb. However, in formal contexts a plural verb is preferable. However, such plural nouns as “criteria” and “phenomena” (singular: “criterion” and “phenomenon”) are always used with plural verbs.

All the data is / are classified.

These criteria aren’t applicable to our research.

Some uncountable nouns always end in -s and look as if they are plural, but they have a singular verb when we use them as the subject.

With a phrase referring to a measurement, amount, or quantity, we usually prefer a singular verb:

Two kilometres is not a big distance.

When the first noun in a complex subject is a percentage or a fraction, the verb agrees with the noun closest to the verb:

An inflation rate of only 2% seems to be a minor change but it has enormous consequences.

About 40% of students ask for extra English classes.

When a singular noun can be thought of as either a whole unit or a collection of individuals, we can use either a singular or a plural verb:

27% of the electorate is / are expected to vote in favour of the conservative party.