Complex Sentences: It and There; it as Subject / Object, It's no / There is no...

Complex Sentences: It and There; it as Subject / Object, It's no / There is no...

We commonly begin a sentence with the structure “there + be” when we want to introduce a new thing or person. This structure is often used when we need to show the idea that something exists, especially in a particular location or at a particular time.

There is so much grumbling about everything. Maybe it’s time you stopped whining and did something?

There’s a grubby T-shirt on the floor. Would you care to explain?

When asking a question, we have to invert this structure by placing the linking verb “to be” at the beginning of the sentence:

Is there a good carpenter in the neighborhood? Have you asked anyone around?

Is there anyone who calls you names at school?

There seems to be some background noise in the room. I can’t identify the source, though.

There appears to be a problem with the transaction. Your payment is currently on hold.

Don’t forget that the verb “to be” usually agrees with the subject.

There is a dunce at school who still doesn’t know the multiplication table.

There are lots of newly-built hotels that have definitely ruined the coastal view.

If you’re still hungry, there’re some grapes in the fridge.

Very often “there + be + noun” is followed by a to-infinitive, a wh-clause, a that-clause or a present participle.

There is a puzzle that you need to solve.

There is a parrot that can talk like a human.

There are several things to discuss before the meeting begins.

There is a young man waiting for you in the hallway.

“There being” is a special clause in formal English. We use it when we want to show the reason why something happens or must happen:

There being no further discussions, the session was ended.

We usually put an introductory “it” at the beginning of a sentence and place the complex grammar at the end of a sentence:

The English people being selfish is a common belief.

It is a common belief that the English people are selfish.

We use an introductory “it” when we want to emphasize or focus on some facts or events that will follow closer to the end of the sentence.

It is dangerous to play with matches.

But! Playing with matches is dangerous.

When the subject is expressed by a secondary clause (a that-, wh-, -ing clause) or a to-infinitive, the introductory “it” is commonly used:

It’s not true that all our dreams come true.

It’s important not to clutter the kitchen as the new fridge is to be delivered tomorrow.

It’s not worth pruning back the advertising budget by 20%.

The common structures with an introductory “it”:

It scared him out of his wits to have seen her lying on the floor unconscious.

- it + take + object + to-infinitive. When we use this structure, we want to express the amount of time you spend on doing something:

It took me 20 minutes to adjust the bedding to my liking.

It seemed that he had been shivering in the pouring rain for hours waiting for the bus to come.

It suddenly hit me that he had known everything all along.

“It” can be used before the conjunctions “if”, “when” or a that-clause. In this case, the introductory “it” should be followed by such verbs and constructions as: to like, to love, to hate, can’t bear, can’t stand.

I like it that yoga brings the feeling of well-being into my life.

I can’t stand it when I am unable to articulate my thoughts.

Also “it” can be used before a when- or if-clause with such verbs as: to understand, to prefer, to enjoy and to dislike.

I prefer it when I can derive some benefits from my work.

But you should remember that in spoken English when some verbs (to accept, to deny, to guarantee, to mention, to admit) are followed by a that-clause, the “it’ can be omitted:

You can’t deny (it) that there's an abyss of misunderstanding between us.

With some verbs (to remember, to emphasize, to predict, to argue, to discover, to notice) followed by a wh- or a that-clause we can’t use “it”:

I can predict that you will be promoted soon.

I can predict it that you will be promoted soon.

You owe it to yourself to be perfect.

I see it as an absolute victory that you should have received custody of the child.

The expressions including “it” and “There is/no”: 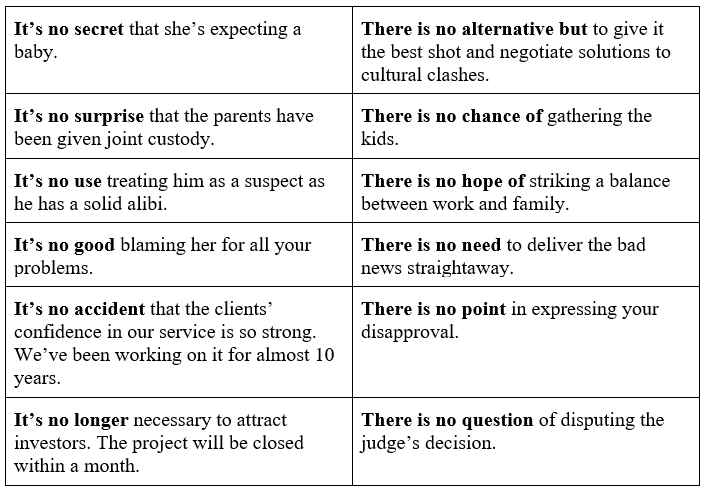